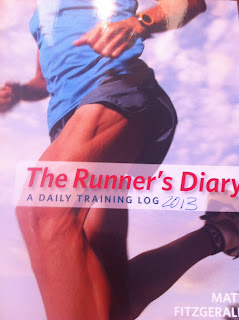 I finally picked up my running log for 2013. Luckily, I found one at Barnes and Noble, so I didn't have to send away for one like last year. Yep, it's a real live grab-the-pen and write in it log. And yep, I know there are a multitude of websites where I can log and track my miles (in fact, I use one: dailymile.com). I simply prefer the written log for several reasons.

First, I'm an old school kind of guy. I began running in 1966 and on my first day of cross country practice, Coach Pingel said, "log your miles." So, I did. I've put logs on lined paper, self designed calendrical formats (calendrical..... like that one?), and pretty much every major log ever published in the running world. My preference is The Runner's Diary, designed by Matt Fitzgerald. I like the ease of writing a workout and the subsequent ease of reviewing them as well. There is plenty of room to pontificate the virtues or flaws for any given workout and pages for goals, progress, pace charts and more.

One of the driving forces behind my running is the connection of me to my planet. Maybe it's a kinesthetic thing. I like the actual act of running, the doing it. As a result, I like to actually write about my runs. Pen to paper. What a concept.

I like the privacy of my log. Fitzgerald calls it a "diary," and some days it reads very much like the musings of a heart-broken or extremely smitten teenage girl. I get to ramble, praise, criticize, and rant to my heart's content. And..... like I said, I get to write. And Lord only knows, in this 21st century most humans handwriting has gone to hell in a hand basket from lack of use. On dailymile.com, much like other forms of social media, anyone can read my postings, so I tend to be a little more guarded. "Just the facts, ma'am, just the facts." In my log, I can let loose.

More than privacy, I have concerns about the Daily Mile's (and any other website's) longevity. What happens if they fold tomorrow? Where do my workouts go? I know that if Facebook dies tomorrow, I'll still have friends and still have pictures. I won't lose the content of my life. I will survive. But lose my workouts? No, not willing to risk that!

Mostly I enjoy using my log to reflect back on my running. I can trace progress prior to a race, see where I overtrained, relive the fast days. It's fun to look back and see entries like: "10 miles easy, 57 minutes."

Reflecting on my running is, in many ways, reflecting on my life. Having chronicled forty-six years of an activity gives me wonderful insight when it comes to the years gone by. I can read the highs, the lows, and everything in between. It has become, maybe, a snapshot of a life on planet Earth.

So, I was excited to catch up this morning. And excited to look ahead.

What is a Goal, Anyway?

The question, as I ponder my lack of goal achievement in 2012, is what is a goal, anyway?  According to one of the many only dictionaries available, a goal is "the result or achievement toward which effort is directed."

I like that definition because it targets "achievement toward which effort is directed." I think that means if I'm making the effort toward my goals, even if I don't make it, I've been successful. Right?
Yeah, sure.

So here's how we did with the 2012 running goals:
1. Run every day. This is a goal I set most every year as I strive to be consistent in my running. I had an excellent string going until the calf injury hit in September. Having lost 11 days of running to the dreaded calf heart attack, this goal was not completed.

3. Races. Simple: 3 marathons (would love it if one is New York but that's a crap shoot and a VERY EXPENSIVE crap shoot at that), 1 Half Ironman, a 50K+ and 10 other assorted runs of varying length (time to hit the 5K - Half Mar circuit). I raced thrice in 2012. A 4K, a ten miler and the uncompleted Savannah Marathon. In the first two, I placed in my age group.

4. More weight loss. I said: "ended up with 26 net loss last year. Need that much again to be lean and mean." I suppose this one could be called accomplished as I have a net weight loss of 6 pounds for the year. The hope was to go much lower, but that is a daily struggle which continues in 2013.


So, it didn't go quite as well as I might have liked. Luckily, I don't get paid to accomplish running goals. The mileage does make me somewhat happy as the 2762 is my eleventh highest total in my 47 years of logging runs (not bad for an old man). And of course, completing the journey to 100,000 miles was very cool.

1. Run every day. I'm not as hung up on this one as usual, but I throw it in as it is the initial goal every year.

2. Run 2700 miles. This goal, too, has some flexibility. I'd actually like to approach 3000, but don't want to get overly hung up on it. I would have been fairly close to that this year, as I figure I lost at least 200 miles during the calf issues, maybe more.

3. Race. Again, three marathons, an ultra (probably 50K) and a host of other events. Let's put a number on it....... okay, 12 other events. I still have half an inclination toward a half Ironman, but I know how little time there is to add swimming and cycling to the program. New York? Boston? No, not on the radar this time.

6. Broaden my horizons. I want to improve as an athlete this year and I'm still unsure as to what that might mean. In my mind, I see yoga, maybe Tae Kwon Do, who knows? But the key here is to increase strength, flexibility and coordination. Very tired of being the tight runner guy.

7. Have fun! As is always the goal, I will continue to lead my life as an exercise in FUN!