I am confessing to being highly UNmotivated about my running the last five weeks or so.

Yeah, I'm still running. Hanging in at about 45 miles a week. In fact, as of this morning's run, the consecutive day streak sits at 492. It's getting up there. Fast becoming one of my best streaks. I'm even being consistent with my strength and core work. Motivational? Not really.

I was going to enter the Napa Valley Marathon and thought that might be the key to a surge in focus and drive. But I didn't. Really not motivated enough to spend the money to run casually slow with the masses.

I thought the Olympic Marathon Trials would help. It was an awesome spectacle of America's finest distance runners and I thoroughly enjoyed it. But no, no long lasting effect on my own get up and go.

I spent a week in Southern California and thought that would help me bounce back. The warm climate, the sea level bounty of oxygen... Unfortunately outside of a couple of decent runs around the Mission Bay area, it just didn't do it for me.

So, I'm out the door. Excited about the morning run?
Not so much. But it's coming. Run on! (Well, maybe the exclamation point is a bit much)
at January 30, 2012 No comments:

Thanks Al Gore! Stick it, NBC! 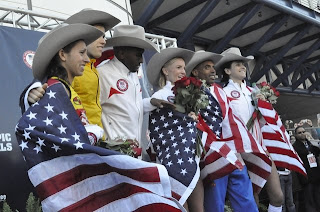 The Olympic Marathon Trials were today and like many participants, this spectator had a difficult time staying with the race plan. The original idea was to stay busy all morning, not go anywhere near my computer and watch the delayed coverage with fresh eyes. I lost contact with the plan right from the gun.

The live coverage on Runners World was very good. Amby Burfoot wrote as the men's race progressed and Scott Douglass handled the women's version. Both did an outstanding job, especially considering they were slaves to the video feed. They were accurate, had good observations and both delivered a few yucks along the way (my favorite was when someone wrote that the coverage would be better if THEY were doing the job. Scott responded that the comments would be better if he were in front of that guy's computer :)). The suspense was palpable and the comments of fellow stream watchers was fun!

Some of the best action was on Twitter at #houston2012. The reports came from EVERYWHERE. People on the course, people at their homes, not to mention several other world class tracksters following the action. At a rate of close to 100-150 a minute, it was too fast and too furious to absorb it all. But mostly, a huge gathering of marathon fans from everywhere!

Then there is Al Gore. If he had not invented this whole internet fad, none of this would have ever happened. If it were not for him, same day delayed coverage would have been a treat and NBC's cold disregard for the running community would have been largely ignored. But, it CANNOT be ignored.

NBC fashions itself to be the Olympic channel. Consistently, however, the show themselves to be just another network prostitute for the four "mainstream" sports. Fortunately for me, I DVRed the race and will watch it without the commercials, hopefully never having to know who helped sponsor NBC's non-relevant and much-too-late network "coverage." Unfortunately for all of us, we are stuck with them covering this summer's Olympics (and the Track Trials in June). That's too bad.

On the bright side, it was an awesome race and five of my six predicted qualifiers made it (no way I would have seen Abdi getting the job done. Also: felt terrible for Ritz and Amy). On to London!
at January 14, 2012 No comments:

While many of my Tebow-infected, Colorado brethren are anxiously awaiting Saturday nights playoff game between the Broncos and the New England Patriots, this guy is ready for the highlight of the day......... wait for it ........ the Olympic Marathon Trials. While football games are a dime a dozen, every four years the best American distance runners vie for three tickets to the Summer Olympic Games, this year in London.

The Men's race for the Olympic Marathon Trials Saturday took a major step backwards when Galen Rupp withdrew from the competition. Rupp, a 25 year old from Oregon and the American record holder at 10,000 meters was to be running his first marathon.

Frankly, I'm extremely disappointed for several reasons: 1) the race has become VERY predictable now as Rupp could have been a very interesting wild card, possibly even chasing Ryan Hall if he had a good day 2) It is time to make the move. In the olden days runners moved up to the marathon in their very late twenties. Today, many Kenyans and Ethiopians enter as young as twenty-one or two. Fresh off his amazing 26:48 10K, Rupp was primed to move up. Unfortunately for American Olympic hopes, we can wait another four years when he won't be as fast. and 3) I was really looking forward to it (and this IS about me, you know)!

So, my tainted prediction for the Men's race becomes simple: Ryan Hall wins by as much as he wants, followed by the only two other world class marathon runners we have, Meb Keflezighi and Dathan Ritzenhein. Meb's been injured, Ritz is endlessly injured and so both are tenuous at best. Hall's worst marathon performance is still better than most of the other "players." The problem is that after them, there is little upon which to hang your hat. Each Trials seems to have a surprise, but this time I don't see it. Maybe Mo Trafeh, Brett Gotcher, Nick Arciniaga, or Jason Hartman could have great days. Anyone else would be a BIG surprise.

The Women's side is much more interesting with a host of viable placers and potential medalists in London. The top of the field is Desiree Davila and Shalane Flanagan (given alphabetically, because while I know these two ladies will be the top two, I'm not sure the final order). Both are very tough, like to win and have the ability to do so. Davila has the faster marathon time and a bit more experience. Flanagan has the fact that she is Shalane Flanagan and that makes her hard to beat in this country.

After the top two, it gets absolutely fascinating. I believe that as many as SIX women could compete for the coveted third spot. Kara Goucher would seem to have an inside track due to her times over the past couple of years. To buy that, however, you have to discount the comeback skills of Deena Kastor (one of the two greatest female American marathoners of all time), the experience and racing savy of Magdalena Lewy-Boulet and Jen Rhines and the rising stars of Amy Hastings and Stephanie Rothstein. And the best part of this competitive scenario is that any of these women would be a great addition to one of the most competitive Olympic Marathon teams in American history.

Okay, so quit stalling. On to the predictions:

As a passing note, coverage for the Olympic Trails will be tape delayed and two hours long on NBC. REALLY, NBC? You are supposed to be the Olympic network. Surely you can do better than this. And if that's not bad enough, there is no live streaming video during the race. NBC has shown once again that they really don't care about anything but the cutsie-ass human interest part of the Olympics, and of course football. Having said that, with there being well over 50 million runners in this country, we are the poorest lobby for our sport. If we shouted, NBC would have to listen.

Fortunately, for NBC, we are not shouters, we are runners. Instead of protesting Saturday morning, we'll be sneaking in a run before the mediocre coverage begins.

After a week of careful self examination and contemplation, I have set my running goals for the year 2012. Mostly, I have decided that the "failures" of 2011 (and there were several) will be incentives for 2012.
So, without further jibber-jabber and/or needless pontification, here are my goals for this year of elections, Olympics and an extra day...
1. Run every day. This was one of the goals I accomplished last year. I'm proud of my streaks because they indicate two very important things: health and dedication.
2. 2500 miles. After nearly 2800 in 2011, you could say I'm backing off or wimping out (that's okay, you really CAN say it). Actually, I'm simply trying to be a little more relaxed. PLUS all I need to do is get to 100,000 total career miles by the Mayan Calendar deadline and we'll see after that (need 2195 miles for that).
3. Races. Simple: 3 marathons (would love it if one is New York but that's a crap shoot and a VERY EXPENSIVE crap shoot at that), 1 Half Ironman, a 50K+ and 10 other assorted runs of varying length (time to hit the 5K - Half Mar circuit).
4. More weight loss. Dropped 32, ended up with 26 net loss last year. Need that much again to be lean and mean. And don't worry, I still won't be mistaken for an East African by any means.
5. Strength and Core work. The goal is 120 days of S & C.
So there they are, my goals - set in stone. I'm excited. And by the way, it's Leap Year. We get another day to run! NICE!!!
at January 09, 2012 1 comment: