The Savannah Marathon is three days away and I'm doing what any red-blooded runner would do: I'm lowering expectations. 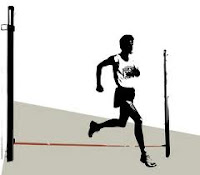 Not yours, of course, you don't have any. The six readers of this blog are all supportive, wonderful people who will be happy with any result I achieve. I am lowering the expectations of me, the guy upon whom this task is laid. So, without further adieu, let the lowering begin....

First and foremost, I have missed a TON of training since injuring my calf on a routine ten mile run September 3rd. While diligently nursing my calf heart attack (see http://www.thestick.net/Articles/Calf_%20Heart_%20Attack.htm for a definition of the injury), and noting significant progress, I have not been forthright about my fears surrounding this mishap (I am, by the way, in good company when it comes to not being forthright about attacks in September, but I digress...). In truth, I have been massively disappointed AND terribly afraid.

It was my hope to not only qualify for the Boston Marathon (3 hours, 55 minutes for my age group), but possibly run close to 3:30. All the signs were there: my training had been going very well, I was consistently and effortlessly logging 70-80 mile weeks, my long runs between 16 and 20 miles were getting easy and frequent, I was entering the quality training blocks and finding myself up to the task. And the weight was rolling off. Having begun my 18 week program at 220.8 pounds, I was down to 192.2. It was the lightest I have been since the year 2000. I was on my way to 175, which was my race weight at the Flying Pig when I ran 3:10 twelve years ago. Then, the calf heart attack struck without warning and with complete disregard of my hopes.

I've had one of these attacks before. It was 1993 and I was at the 18 mile mark of the Long Beach Marathon. I was on a perfectly flat stretch of brand, spanking new asphalt (and sub 3 hour pace, by the way), when out of nowhere my calf exploded. Exploded, you say? Yep, exploded. I'll tell you what I did: I stopped and looked back at my calf for blood because I thought I had been shot. That's what I mean by exploded. Unfortunately that injury lingered for close to a year. So when it happened on an easy (and I mean EASY) ten miler a little more than 8 weeks ago, I knew that magnitude of what had occurred. Frankly, it scared me a bunch. I also knew that the Savannah Marathon would not be what I had wanted it to be. HUGE disappointment.

Okay, it's not ALL doom and gloom. In this time of recuperation I have discovered the world of compression socks, calf stretching and self-massage with The Stick. Oh, I am not kidding. Compression socks, despite looking terribly girlie are VERY effective. Stretching my calves is exhilarating and Stick massage? Stick massage, when performed correctly, is an express line ticket to self-inflicted pain of the highest order. Exactly what I deserve for allowing this attack to happen in the first place. 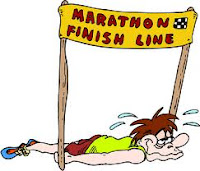 SO, new goal: I plan to make it from the start line to the finish line without incident and without a major calf occurrence. Maybe I'll run close to four hours. To be honest, I don't know. I have no idea where I am at this point and completely unsure as to the potential benefits of some really great base training. We'll see. And, bottom line, that's the story of running a marathon..... we'll see.

26.2 miles is a long way and a multitude of issues may arise. Even the best in the world can have perfect preparation and succumb to the realities of the long race, so why would I expect my experience to be any different?

I will give it whatever shot I have available and we'll see what my 16th marathon has in store.  It could be fun. I won't, however, be that skinny old guy you see in the pictures.

On October 3, 2012 after 46 years, one month and 21 days of running, I ran my 100,000th mile. It came in mile 7 of a moderately uneventful 8 mile run in the Cherry Creek State Park during recuperation from a calf injury. Like most runs, there was nothing particularly unique about it. I ran the first 4 miles alone and was joined by my wife, Linda, for the last 4.

The story prior to that run, however, set the foundation for many, many miles.

It began mostly because I didn’t want to be embarrassed. The first day of Cross Country practice was Monday and it was already Friday, August 12, 1966. I needed to get in shape fast! So I laced up my new Beta Bullets and went for a run. It was a half an hour in duration and the only thing I recall is that it seemed like FOREVER!

The next day, I did it again. I took Sunday off (well, it was SUNDAY, right?) and reported for practice bright and early Monday morning. I had no idea what was to come and especially the significance it would have on the entirety of my life.

I wasn’t showing up at just any cross country practice, I was going to be a member of Coach Al Pingel’s Wyandotte Roosevelt High cross country team, one of the best in the state. The running Bears had been in the top three at state regularly and boasted the defending state champion, Al Ruffner. And, at least in my mind, there were expectations placed on my performance.

In Junior High, part of P.E. was running this thing, ominously called “the distance run.” It was actually a mere 3/4 of a mile, but in 7-9 grades, someone must have felt that was a long way. I remember doing it fairly well as a seventh grader, beating everyone in my class. In eighth grade I broke the school record (which was around 4:20) by running 4:02. The next year, 3:36. The next day, high school coach Al Pingel was at class. Game, set, match: I was a cross country runner.

At the morning practice, we warmed up, stretched as a team and ran the workout. It was 6 x 440, followed by some kind of drills followed by the unfathomable news that we were expected to return later that afternoon for a second workout. A second workout? This guy was serious (Coach Pingel, not me). That afternoon, we ran for 45 minutes. He called it the Boston Marathon and it was the first time I had ever heard of that race or run that far. I made it, learning that my body was capable of doing things that my mind wasn’t so sure about (wouldn’t be the last time for that lesson). I also was taught that day the importance of logging my runs, so I did (still do). The next day, I could barely walk (backwards down stairs). Somehow, I lived to tell about it.

Cross Country, and then Track and Field allowed me the opportunity to travel to other schools, meet other runners and to experience a part of the sports world different from my earlier participation. I had played some football, a little basketball and I don’t mind saying, was an excellent baseball player (pitcher). I liked being on a team, but cross country supplemented the team part with the individual focus. I could run well and win. There was no worry about a shortstop making an error allowing in the winning run or a teammate missing a free throw at a crucial point of a big game.

Those three things: travel, people and the individual challenge were part of the draw for me. They’ve also been part of the big payoff. As a collegiate, post collegiate, and as a marathoner, I have traveled to places I would have never seen had I missed this golden opportunity. I’ve made, and continue to make,  some wonderful friends. I’ve won some races, accomplished goals, ran in a few national championships, ran from Detroit to Mackinac in seven days during Spring Break (342 miles), represented my country once, and met a plethora of other more self-directed challenges.

And frankly, I’m not convinced I’d have gone to, or completed college had it not been for my involvement as a runner. I most certainly would not be the person I am today. More than 100,000 miles later (Yes, Coach Pingel, I log my miles), I happily acknowledge that 46 years ago, I began a journey that would transform my life with a simple 30 minute run. And while the travel, people and the racing have all been rewarding, I knew that first day that there was something I really liked about the act of running. I wasn’t exactly sure what it was, but I felt something.

And upon reaching the 100,000 mile mark, I am grateful for what this simple aerobic activity has done for every facet of my life and being.

Running was/is a simple activity, cyclical in its nature. One foot placed in front of the next in order to move forward: to cover ground, to open my mind, to allow me opportunities to escape my troubles or celebrate my triumphs. Mostly, to connect me to and strengthen my relationship with this planet upon which I exist. For that, I am ecstatically, humbly grateful.

John Parker Jr. said it best in his epic story, Once A Runner, “Running to him was real; the way he did it the realest thing he knew. It was all joy and woe, hard as diamond; it made him weary beyond comprehension. But it also made him free.”

I am proud to be a runner.

Best Moments:    winning my first cross country race (1968 at Elizabeth Park);  Running from Detroit to Mackinac with my college teammates (1971);  Almost beating Don Kardong at Springbank;  being in a pack with Frank Shorter, Herb Lindsey, Stan Mavis and a few others for just under two miles in an East Lansing 6 mile (then Frank said, "let's go" and they were GONE); Everyday I get to run!

Best Quotes:    Frank Shorter saying to me, "As much as you run, you'd think you'd weigh less."  At the Florida Relays Marie Hamilton telling me, "I don't think you're skinny. You're slender."  Bill Rodgers while I was dying trying to keep up the day before the NYC Marathon "Is the pace okay?" (by the way, the next days race didn't go that well)   My wife, Linda, MANY times on the phone "Are you still running?"  and...... Dean Karnazes during our conversation after my 100,000th mile "Inspire you? You inspire me."

Best Running Book:     Far and away, Once A Runner by John Parker Jr.   Honorable mention to:   The Purple Runner by Paul Christman, Ultramarathon Man by Dean Karnazes, The Perfect Mile by Neal Bascomb, and Pre by Tom Jordan