Dreadmill Not So Bad - this time! 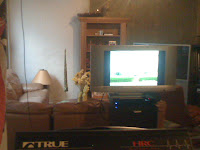 I decided, for safety reasons, to run on the treadmill this morning. I struggled with the decision for some time as, in my mind, that decision is made because I am too chicken to go outside.
Too cold? Not today, besides, I don't mind the cold. Having lived near Alamosa for 13 years, I've run in some very cold temps. It was so cold once that .... (fill in your own favorite "it was so cold story"...)
For me, the treadmill is a safety decision. When it's either too icy or I can't get access to a safe place I'll choose to run indoors. Normally this means a short day as most often my tolerance level for the dreadmill is 3-5 miles. Today, I chose to rise above my own attention span and logged 9. I have to say, it wasn't too bad. Armed with much water, a towel, my DVD player and an always carefull chosen video selection, I attacked the machine.
I don't know about anyone else, but I have a very limited repertoire of acceptable viewing choices while running in place. To begin with, I can't stand television programming and the commercials are worse (see today's blog at http://richyacks.blogspot.com/2011/01/into-ice-box-till-super-bowl.html for an in depth analysis of the boob tube). Next, for some odd reason, I don't do well with movies. SO, what remains is simple: I watch other people run.
The best treadmill runs are visually escorted by a marathon. Today it was the 2008 Olympic Women's Marathon. Any other day might see one of the big urban races (New York, Boston, London, Berlin) or another Olympics. Favorites include Gelindo Bordin's 1988 Olympic Victory, Khalid Khannouchi's Chicago win, Moses Tanui's wins in Boston, Joannie in LA (although half of that was mysteriously erased once).
My wife believes this habit to be weird, but I'm okay with that. I think I like running with my marathons as it helps me to be more anchored in what I'm doing. Never really been into the whole disassociation thing, anyway.
So nine down this morning, maybe a few more later. The sun is out, the roads and paths will clear and once again the treadmill can become what it was meant to be; a nice piece of furniture in the basement.
Eight weeks until the Napa Valley Marathon!
at January 10, 2011