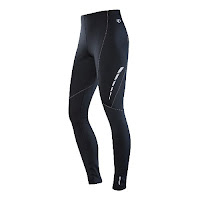 Saturday it was 80 degrees, this morning's run, it was 16. It's springtime in Colorado. So just when I thought it was safe to store my winter gear until the fall, I was breaking out the tights and jacket this morning. The tights are the issue.... oh the tights.
I'm a loyal consumer. I bought my first pair of Nike Waffle Trainers back in the mid 70's. Other than a few short escapades with a great pair of Tiger Oboris and Brooks flats for racing, I have been extremely faithful. Find me on any run and I will be branded in sartorial splendor as a dedicated Swoosher. Shoes: swoosh; socks, yep; shorts, you bet; top, arm warmers, hat - check, check, check. Outside of some technical gear from the latest races and the jackets obtained at those same contests, I am swoosh-boy. I have never asked for anything in return and have never complained about my "contract" with Nike. As stated, I am loyal.
So, back to the tights. I own two pairs of Nike tights. I don't wear them. I suppose I could give them away, send them back, take them to the Salvation Army or Goodwill. It's not that they aren't nice or don't fit or are some hideous color. I don't wear them because they don't take care of me. In fact, if I were an Adidas, or Asics, or Brooks, or Mizuno guy I wouldn't wear theirs either. I wear Pearl Izumi tights.
The reason is simple: Pearl Izumi was wise enough to insert a brief into their tights. Everyone has them in shorts - no brainer, right? But what about tights? Doesn't anyone know that Daddy still needs to keep the package in a ....... well...... package?
Sure, I could wear shorts underneath, but that is SOOOOO 80's AND kills the smoothness of my rear end view. And since most of my shorts are longer than the average, it would not only look terrible, but would feel like I was carrying a load in my britches. Not good.
So, hey Nike...... (or anyone else), what's the deal? What about me, what about MY needs? Let's jump into today's world and help a guy out, briefly of course.
at April 04, 2011