Man vs. Computer: Round 3 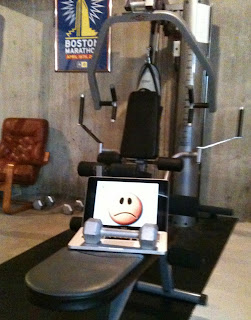 There's a fresh skiff of snow on the ground. The high today might reach 40 degrees. I'm still feeling the effects of Thursday's terrible 17 mile run. It's not the best start to my day. Someone or some thing has to pay.
If you recall, not too long ago I decided to strike a blow for all of human-kind by negating the depressing results of the Man vs. Computer contest on Jeopardy by challenging my own computer to a five mile run. You can read about this lopsided event at http://runspittle.blogspot.com/2011/02/man-vs-computer-round-2.html. Short story even shorter: I won.
This morning I decided to give Mac (my Macbook) an opportunity for redemption. I challenged Mac to a bench press contest. Knowing that, when purchased, Mac was touted to be lighter, faster and more powerful than previous versions, I was a tad worried.
I was open. I would have considered an alternative lift. I would have even competed on the weight machine. But Mac seemed much more comfortable on the free weight bench so we went with that. We started extremely light (10 lbs) and that was it! Game over! I'd show you the picture of me triumphantly holding my ten pounds overhead (yeah that's 4.5359237 kilograms, baby!), but it's probably best I don't publicly humiliate Mac. I need him for work.

So Round 3 is in the books and the results are in: Humans win again!!!

You're welcome. It's the least I can do.

Rich Sands
I began running on August 12, 1966. I thought I should run a couple of times before the first cross country practice entering high school. I have pretty much kept with it since. There were times when I was fast, skinny, slow, old, injured, delirious, pained, jubilant, joyful, stressed and everything else one can imagine. Most often several interplay on the same run. I've run more than 113,000 miles and I am proud of that number. It shows a long term commitment to something that has given me a way to look at the world I would have never possessed had I not chosen this path. Now that I have hit the 100,000 mile mark before the Mayan Calendar ends it's anyone's guess as to what is next... Maybe 200,000 kilometers... 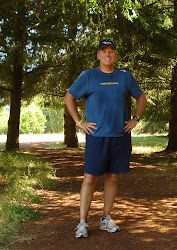 Time Slow, but it was BOSTON!!!